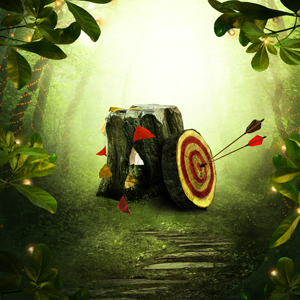 EARLY BIRD SALE! Book before 29th February to save up to 33% on Iris' summer season

Nottingham is in peril. Taxes are rising, the corrupt Sheriff is stealing the homes of the poor and the wealthy keep getting wealthier.

Now, with the usurper Prince John plotting the demise of the King, a band of friends, robbing from the rich and living as outlaws, realise this is their chance to make a change.

Robin Hood, their leader, has one shot to uproot the Sheriff’s oppressive reign. Together with her merry men, she can protect the King’s rule and liberate the people, but she’ll need some help from the inside to pull off her most daring heist. Can her arrow hit its final mark?

Come and join Iris in Sherwood Forest for an action-packed adventure for all the family this summer, and experience the world premiere of a brand new adaptation of one of England’s oldest tales, written by Teresa Burns (Wild and winner of the Funny Women award 2019) and directed by Rafaella Marcus (Bury the Dead and associate director for Emilia).

This summer, join Iris at its annual season of outdoor theatre at the beautiful 17th century St Paul’s Church in the heart of Covent Garden. Escape to the forest, where fairies, lovers and a travelling band of actors await magical wonderment in A Midsummer Night’s Dream, and where Robin Hood and her merry men plot to take on the corrupt Sheriff of Nottingham for one final showdown.

Now in its 12th year, Iris’ summer season has become a critically-acclaimed, award-winning part of the theatrical calendar, welcoming thousands of people to the incomparable Actors’ Church right in the middle of the West End, just steps away from centuries of theatrical history. Taking place across the grounds of the church as well as inside Inigo Jones’s masterpiece, the summer shows are an escape from the hustle and bustle, and an experience like no other.

The season complements Iris’ year-round work as a charity and hub for emerging and mid-career artists alike, supporting creatives with transformational opportunities as they take their first or next steps into their profession.

You can save 10% on your tickets to the Escape to the Forest season if you book for Robin Hood and A Midsummer Night's Dream in the same transaction - the discount will automatically be applied to your cart before checkout. (Excludes early bird tickets)

Please note: in the event of rain, it is usually possible to go ahead with the performance, but exceptionally heavy rain may cause a stop or delay to the show. If the weather is persistent and the show is cancelled for safety reasons before the interval commences, then exchanges will be offered on a like-for-like basis - or if it’s not possible to exchange for the same show, then credit will be offered towards a future Iris Theatre production. In the event of cancellation after the interval commences, heavily discounted tickets will be offered to purchasers for a future performance within the season. Please note that the show is never cancelled due to inclement weather earlier than 5 minutes before the performance.