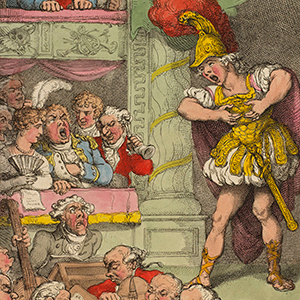 Inspired by Rowlandson's impressions of music in Georgian London

Thomas Rowlandson (1756-1827) portrayed a Golden Age of theatre in London, capturing the colour, vitality and contradictions of late Georgian society when packed audiences were hearing the operas of Mozart and Rossini for the first time. This evening’s concert draws its musical themes from Rowlandson’s spirited illustrations of London in the Georgian period as well as his scabrous satires of performers and society figures, such as the Duchess of Devonshire.

Opera Prelude is delighted to be partnering with Nicholas Knowles, a lifelong collector of Rowlandson’s works, for a performance that will bring together the  musical and graphic arts in a sparkling evening event, to take place in St. Paul’s Covent Garden, a venue often depicted by Rowlandson himself and where he is now buried.

Opera Prelude is a registered charity, established in 2010 and dedicated to supporting post-graduate singers in the transitional period between leaving Conservatoire and embarking on a professional career.

Running time: 2 hours with the addition of a 20 minute interval.