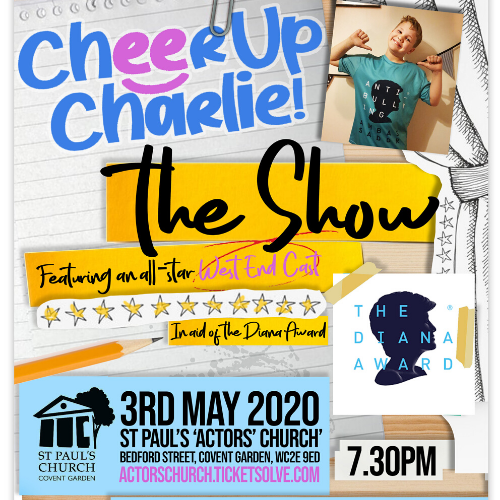 A Charity Concert with an All Star West End Cast

#CheerUpCharlie - The Show which will be taking place at The Actors’ Church in Covent Garden on Sunday 3rd May at 7.30pm with an All-Star West End Cast celebrating their Ambassador Charlie Kristensen and his campaign with The Diana Award to raise awareness of anti-bullying. Proceeds from ticket sales are going to The Diana Award which runs the UK’s leading anti-bullying school programme.

Little Charlie, as he is affectionately known, campaigns to raise awareness across schools and all those who are involved in the world of Musical Theatre, Dance, Drama, Performing Arts and Entertainment. This unfolded after Charlie was bullied at school and his singing teacher, Jacqueline (Jax) Hughes, asked her Musical Theatre community of friends to send a few simple messages of support. What followed was an outpouring of empathy, love and people supporting Charlie, hoping he could ignore the bullies and stand up to them. From this terrible situation, #CheerUpCharlie was born, and something very negative was turned into a positive by a little boy with a huge amount of enthusiasm, focus and determination.

As Charlie says - "I may be just one boy with a small voice, but I have a huge tribe behind me, and I will make a difference".

Come and join #CheerUpCharlie, Jax and their Tribe of West End friends in this celebration of Music, Dance and laughter in support of the Charity, The Diana Award which runs the UK's leading school anti-bullying programme.

We will be adding further artists over the coming weeks. All artists are subject to availability.

Running Time - 2 hours and 30 minutes, including a 15 minute interval.

VIP Tickets include - first two rows seating, a complimentary programme, a glass of champagne, a Diana Award #CheerUpCharlie wristband and a meet-and-greet with Charlie.