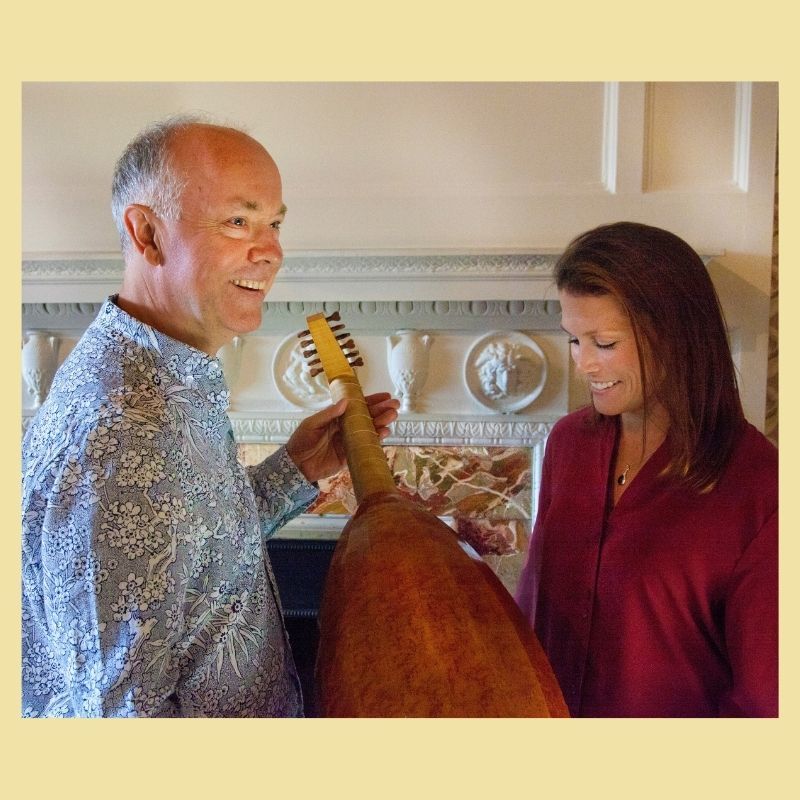 Solo song performances and especially singing to the lute were held in highest regard in courtly circles, merchant house concerts as well as popular culture in early sixteenth century Italy.

KATE MACOBOY, soprano and ROBERT MEUNIER, lutenist perform songs in a new adventurous performance style based on the Italian Renaissance principles and techniques used by actors and orators to best realise the expressive language of song in a dramatic, yet natural way.

In realising the natural rhythms of actual speech, they have recaptured the spontaneity, freedom, flair and freshness of this rich and richly rewarding music. For this recital, Kate and Robert will perform songs from their recently acclaimed CD album, “Michelangelo’s Madrigal,” which amongst other enthusiastic reviews, received the accolade ‘Recording of the Month’ from MusicWeb International. For details, see www.mmmvsic.com

Robert Meunier played guitar in a band in Toronto before turning to formal musical studies at the University of Western Ontario in London, Ontario. He obtained a lute performance diploma from the Royal College of Music in London, UK. As lutenist and musical director, he has been playing and researching early Italian Renaissance song and lute solo repertoire for over thirty years. He has taught the lute, recorded for CD releases with Chandos, CRD and BIS and radio and television broadcasts for CBC and BBC, including programmes for BBC Radio 3 on Tromboncino and Isabela d'Este. He has performed throughout Europe and North America both as a soloist and with specialist ensembles including performances at many of the major music festivals. Over the years he has developed an interest in the connections between music, the visual arts and poetry. In particular, he has performed in the intimate settings of 'Old Master Galleries' both in the solo lute song and lute solo repertoires. He has written articles for classical music magazines, articles regarding his and Kate’s new approach to Italian Renaissance songs with references to their acclaimed music video of Michelangelo's madrigal, as featured in the full length feature film, 'Michelangelo – Love and Death' for Seventh Art Productions. In recent years, he has worked with Robert Toft, a world renowned expert on historical performance practices of vocal music who has published five books for OUP in particular on the subject.

Kate Macoboy, Australian soprano, is a highly experienced ensemble singer and soloist. Specialising in Baroque and Renaissance music, she graduated from the University of Western Australia with honours. In 2010, she completed a Master in Advanced Vocal Ensemble Studies under scholarship at the Schola Cantorum Basiliensis. She performs regularly in the UK, Europe and Australia with several leading ensembles, including, Ars Nova Copenhagen and Chamber Choir Ireland (under the direction of Paul Hillier). She has had European engagements with The Bach Consort and Danish Radio Vokalensemblet and a tour to Hong Kong with the Grammy award winning group, Theatre of Voices. Most recently, she has recorded solo works for Theatre of Voices for a CD entitled, 'In Dulci Jubilo' and performed in a world premiere of Johann Johannsson's piece 'Last and First Men' at the Manchester International Festival which also featured Tilda Swinton's elegiac narration into a poetic meditation on memory, loss and the idea of Utopia.

- Entrance to the grounds will be via the Bedford Street gates only.

- All booking are per individual who must socially distanced from other parties.

- pairs and groups will in the performance space will be separated by two meters.

- You have been asked for your details when you purchase your tickets, this is in line with government guidelines to collect data if there is a need to contact people. Upon arrival you may be asked for your personal details, to be kept on record for no more than 21 days.

- To ensure the safety of other audience members and artists, we politely request that you wear a face mask during the event.

- A three metre distance will be in place between artists and the first row of audience for performances that include singing.

St Paul's Church continues its series of Lunchtime Concert's with a selection of Renaissance pieces for lute and soprano. This work is presented by Robert Meunier and Kate Macoboy.

Fanfare - a recital for trumpet and piano

A concert presented by Marcel Sinfonia with a selection of classical pieces.

In Wings of Song - A Free Lunchtime Concert

A selection of classical pieces for soloist and piano.

PLATFORM is Iris Theatre’s new initiative to champion breakout artists taking the next steps in their professional life. This event series will see the company host monthly showcase nights that will run throughout 2021, spotlighting performers from a variety of disciplines. The first two PLATFORM events as part of our Winter Season, will take place in January and February 2021.